Paella is a Valencian rice dish that originated in the mid-19th century near the Albufera lagoon on the east coast of Spain. Paella is widely regarded as Spain's national dish and Valencians regard paella as one of their identifying symbols.

The word 'paella' is derived from the Old French word 'paelle' meaning pan. Valencians use the word paella for all pans, including the specialised shallow pan used for cooking paellas. In most other parts of Spain and throughout Latin America, this specialist shallow pan is known as a 'paellera'. Paelleras are traditionally round, shallow and made of polished steel with two handles. 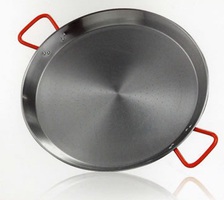 A little bit of history...

18th century Valencians used casserole dishes or Calderos to cook rice in the open air. Water vole meat was one of the main ingredients of these early paellas along with eel and butter beans. Living standards rose in the late 19th century leading to a change in paella's ingredients to include rabbit, chicken, duck and sometimes snails. This dish became so popular that in 1840 a local Spanish newspaper first used the word paella to refer to the recipe rather than the pan. 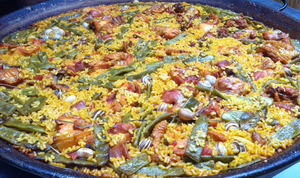 On the Mediterranean coast, Valencians used seafood instead of meat and beans to make paella. In this recipe the seafood is served in the shell. A variant on this is paella del senyoret which utilises seafood without the shells. Later, Spaniards living outside of Valencia combined seafood with meat from land animals giving rise to the 'mixed paella'.

During the 20th century, paella's popularity spread beyond the Spanish border and as other cultures created paellas, the dish took on regional influences. As a result,  paella recipes went from being relatively simple to including a wide variety of seafood, meat, sausage (even chorizo), vegetables and seasonings.

You can also contact us using our online contacts page