Churros are traditional Spanish desserts. They are made from dough pastry-predominantly choux- which is fried and dusted in cinnamon sugar. They are popular in Spain, France, the Philippines, Portugal, South America and Southwestern United States. They can be long and thin or thick, straight or twisted and knotted. They are usually eaten for breakfast dipped in champurrado (a traditional hot chocolate based beverage) or cafe con leche. 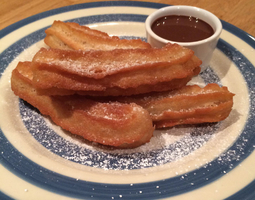 Best of Both Worlds

We follow a traditional recipe from Southern Spain where the Churros are crispy on the outside yet soft in the centre and our Churros are served with a warm, thick chocolate dipping sauce. 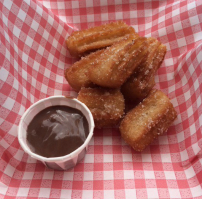 For those of you with a smaller appetite we also offer the much loved Churros mini bites.

A little bit of history...

Churros were developed centuries ago by Spanish Shepherds. The hard working men who spent most of their days working in the hills became hungry for a sweet treat but up high in the mountains, fresh baked produce was hard to come by. These ingenious shepherds came up with this delicious sweet cake-like snack that could easily be cooked in a pan over an open fire. The Churro was born and takes its name from the Navajo-Churro sheep, descended from the Churra sheep of the Iberian Penisula whose horns it is said to resemble.

Originally churros were were about the size of a breadstick and were eaten plain or rolled in cinnamon sugar. It was only a matter of time before Churros crossed the border and became popular in South America and other Hispanic countries. A hollow jumbo-sized churro was created and stuffed with all kinds of delicious fillings including chocolate, fruit and custard.

The original churro (often called a churrito) and the jumbo-sized churro (referred to as a churrisimo) are now widely eaten in Churrismo Cafe eateries.

Churros are piped from Churreras before being cooked. 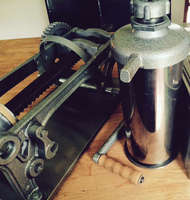 You can also contact us using our online contacts page